Cinemark is a well-known movie theatre chain that is headquartered in Texas. It has an international presence in both Taiwan and Brazil and includes several different brands that operate under the same umbrella. These theatres include Rave Cinemas, Century Theatres, CineArts, and Century Theatres.

The company prides itself on being innovative in the world of movie theatres. You can see it in the way they have embraced technology courtesy of Connections and the proprietary app. The Cinemark survey is just one more way that the company encourages consumer feedback so they can keep up with demands and adjust as needed.

The theatre chain was first introduced during the 1980s, complete with video game arcades. If you were a child of the 80s and into the 90s, you probably remember those massive arcades that just seemed like a natural extension of the theatre.

It wasn’t until 1988 that Front Row Joe was introduced as the company’s mascot. He continued taking center stage until the late 90s but made a brief reappearance towards the beginning of the 2000s. Also during the 90s, Cinemark continued to grow into Latin America to include Mexico and Chile.

With all of the acquisitions and new growth, Cinemark has become the third largest domestic movie theatre chain and the second largest chain in the entire world. They have made a few sales along the way like the Mexican theatres in 2013, but it has not impeded their expansion at all, and the chain continues to thrive.

There is really only one dark spot in Cinemark’s history. Many years ago, Cinemark was among the first to incorporate stadium seating in its theatres with the intention of improving the overall movie-watching experience. The U.S., under the ADA (Americans with Disabilities Act), stepped forward and claimed that the chain was discriminating against clients with disabilities because people in wheelchairs were limited to the seats in the front row.

Cinemark originally fought the allegation saying that they were compliant with the law because all they had to do was provide seating, which technically, they were doing. After some litigation went back and forth, they eventually changed their tune and agreed to revamp the layout of the theater to include access to some wheelchair friendly seating in higher rows. 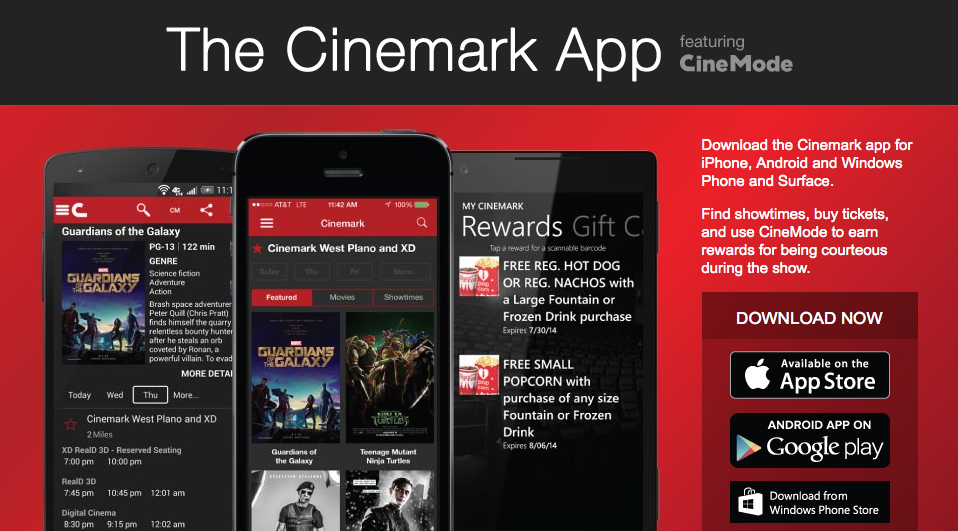 Cinemark has taken note of the way that people use the internet today along with the way they interact with the world around them. As a result, they created a couple of different incentives that you can take advantage of without any sort of fee on your behalf.

Connections members get to earn points when buying tickets and concessions. Those points can be redeemed for a variety of rewards that range from digital downloads to musical exclusives. Connections is free to join, and as a member, you’ll get advanced notice for promotional screenings, too.

You also have Cinemark Theatres app, found on the Apple App Store and on Google Play, which is an app that is free to download and use. With the Cinemark Theatres app, you can access showtimes and purchase tickets for any Cinemark theatre across the country. Inside the app, you’ll find Cinemode, which is a function that allows you to earn rewards and keep your phone silent throughout the movie you’re watching.

If you’re ready to take the next step, especially if you’re an avid movie-goer, then you’re going to want to check out the Cinemark Movie Club. It offers patrons some fantastic perks and incentives as a result of being Movie Club members.

To get started, you can join up and expect to pay $8.99 per month per membership. When you become a member, you receive credit for a free adult ticket that you can use for any 2D movie at any time. If you have any unused credits, they roll over and ever expire for as long as you’re a member.

Additionally, you’re going to be able to reserve your seat online and redeem your member credit without any extra fees. If you’ve already used your credit for the month, you can still purchase seats online without paying the extra fees that everyone else still has to pay.

As another bonus, you also save a full 20% on concessions when you go and purchase your movie snacks and drinks. What’s more, is you earn points every time you purchase something at concessions thanks to Connections, so you’re earning points and saving money along the way. It’s a win-win for the enthusiastic movie lover.

What is the Cinemark Guest Experience Survey?

The movie theatre chain knows what their customers want thanks to the Cinemark survey. It measures the guest experience as well as asking what people want and enjoy. They value customer input, and it has resulted in major changes over the years.

How to Participate in the Cinemark Guest Experience Survey

If you decide to complete the Cinemark survey, with the most recent drawing, you were entered into a drawing for a year of free movies. This would have come to you in the form of 52 Cinemark gift cards or movie passes that are valued at $10 each. According to their rules, the approximate value is $520, which is great if you want to go watch a movie just about every week. Depending on where you are though, you may want to go out on discount days to get full use of a genuinely free ticket.

There were a total of fifteen grand prizes that were awarded once per month with the last prize for this round having been awarded in January 2019. Check back, though, because they offer all sorts of different drawings for completing the Cinemark survey in addition to a variety of sweepstakes.

Useful Info About Other Cinemark Sweepstakes

There are more than just the Cinemark surveys. Granted, the surveys are great, but did you know that Cinemark hosts sweepstakes drawings year-round? It’s a good rule of thumb to go and look at their website relatively frequently to see what their new offerings are in case you’d like to toss your name in the hat.

Cinemark is has run several different sweepstakes over the years, and the prize for these vary depending on which one you decide to enter. As an example, for the Dr. Seuss’ The Grinch sweepstakes which ended on 12/26/18, the prize was a $1000 Visa Gift Card if you entered and were at least 18 years of age. Cinemark also offers sweepstakes for minors like the drawing for a life-size Praetorian Guard that ended January 1, 2018.

In another sweepstakes competition, the I Can Only Imagine drawing led to winning a trip to Nashville
for two lucky people. That one ended back in March 2018. These are only a couple of examples of what you can look for when you go out and see what they have to offer. One of the best things about these drawings is that you don’t have to purchase anything to enter.

With all of the ways that so many sites aren’t user-friendly in an age where the internet connects us all, it’s good to know that Cinemark’s website is easy to use. Off of their Guest Services page, you can find all the information you’ll need for a pleasant experience no matter what you’re doing.

The page starts with talking about tickets and refunds which could arguably be the most important things when you’re going to visit a movie theatre site. It proceeds to accounts, gift cards, and then a more in-depth section on Connections and the Movie Club.

At the end of the page, you’ve got several different FAQ pages that break up the various topics into digestible pieces of information. You can tell that the people who developed this site put real thought into how it was constructed to make your life easier if you ever needed some information.

Taking a Few Minutes for the Cinemark Survey

Take advantage of the free offerings, too, like Connections or the various sweepstakes you can enter without spending a dime. You may find that you want to go to the next level and enjoy more from your movie experience than you thought you could.

Cinemark will continue to be user-friendly from its site to the way the theatre operates if you take a few minutes to complete the Cinemark survey. The company wants to hear from its patrons because if the patrons are happy, they’ll keep coming back for more movies. All it will cost you is a few minutes and a free entry to win movies for a year.

Hours vary by location and by season. Over the summer or during the holidays, hours will typically start earlier than they do in their off-season.

Given the vast amount of locations owned and operated by Cinemark, your better off using their store locator to find a theatre near you.

You can use their Contact Us page to send a message to them, or you can also contact them via phone or snail mail.

AMC Theatres is an American movie theater, founded in 1920, Kansas, Missouri. The chain has quickly expanded to become the second largest cinema chain in the US with approximately 339 locations. If you are in the mood for a movie this evening then AMC is a popular destination for many with box office movies and other entertainment. If you haven’t already visited a AMC location before you can visit them online at AMCTheatres.com to see the latest box office releases along with other services available. Use the theatre locator to find an AMC near you.

So what is the Tell AMC survey all about?

AMC are a company whom listens to it’s valued customers, allowing them to continually improve the level of services and products on offer to the public. If you have recently visited an AMC theatre and would like express your feedback, whether it be good or bad then the TellAMC website is just for you.

The survey shouldn’t take more than a few minutes to complete, and once your finished you can enter the sweepstakes for your chance to win an $100 AMC theatres entertainment card to spend on movies and snacks at your local AMC.

Before you begin you will need a PC or mobile device connected to the Internet and a valid receipt from your most recent purchase at an AMC theatre or alternatively the invitation printed on your postcard.